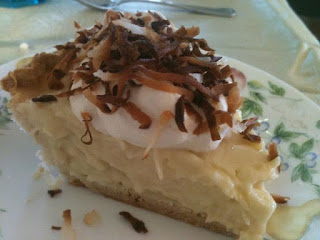 Moody's Diner in Maine is quite well known and appeals to the locals as much as the summer tourists. This past spring, while there was still snow on the ground, my husband and I took a drive and had lunch at Moody's. Although I couldn't eat a piece of their homemade pie, I did convince my husband to get a slice and share some with me. It was heavenly and a few bites just wasn't enough. I went home and immediately created my own low sugar, reduced carb version that was spectacular! Not long ago, I made this for a church potluck supper and, even though the dessert table was loaded with brownies, cookies and other delicious treats, everyone seemed to have their eye on my pie. As soon as the first few people approached the dessert table and took a slice of pie, onlookers became anxious and, without even finishing their meal, they began to storm the table to secure a piece for themselves. Within a couple of minutes, long before most people had eaten their meal, my pie was gone! The lucky few raved and couldn't believe it was a low sugar pie. It's easy to prepare and can be made ahead. If you don't want pie, try making pudding instead. Either way, I think you'll agree that this is the best ever!

2. In a small mixing bowl, whisk the remaining 1/2 cup milk and cornstarch together to make a slurry. Whisk egg yolks with salt in medium bowl. Temper yolks by adding 1/2 cup scaled milk mixture to yolks and whisk well. Add yolk mixture and slurry back into milk mixture and whisk vigorously over medium heat until thickened, about 2 minutes. Remove from heat and add coconut, vanilla, and butter. Whisk until uniformly incorporated.

3. Pour the filling into the prepared pie shell. Cover the pie with plastic wrap and place in the refrigerator. Chill the pie completely, about 2 hours.

4. To serve, top with toasted coconut (see directions below) and a dollop of whipped cream.

5. How to toast coconut:  Preheat oven to 350ºF. Spread unsweetened coconut shavings, or sweetened shredded or flaked coconut on a rimmed baking sheet and bake, stirring once or twice, until golden, about 5 to 10 minutes. If toasting sweetened coconut, check and stir more frequently because the added sugar causes irregular browning.

How does this recipe compare to a traditional Coconut Cream Pie?  My version is significantly lower in calories, fat, carbs, sugars, and sodium.  For comparison, the nutritional information for a restaurant size slice of coconut cream pie is 630 calories, 65 g carbohydrate, 39 g total fat, 24 g saturated fat, 1 g fiber, 370 mg sodium, 43 g sugars, 6 g protein.
Posted by The Diabetic Cook of Maine at 6:32 PM No comments: