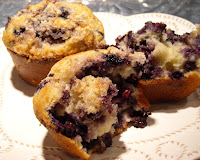 The wild Maine blueberries are in and I can't get enough of them. I wanted to make fresh blueberry muffins, but my past attempts have been less than satisfactory because either they didn't have enough blueberry flavor or, if I tried to add more, the blueberries would sink to the bottom in a soggy layer that would fall apart. I saw a recipe demonstrated on America's Test Kitchen television show on PBS that suggested swirling blueberry jam into the batter, which made sense. So, starting with their recipe, I made changes and substitutions to create a seriously reduced-carb version and the result is spectacular! Before mixing the batter, cook up a small amount of low-sugar, fresh blueberry jam to be swirled into each muffin for a burst of intense blueberry flavor. It's a extra step in the process, but well worth the effort. (Note: You may use frozen blueberries for the jam, but fresh blueberries will hold up better in the batter. Also, use real sugar for the topping because sugar substitute will not melt and crystallized into the crunchy, yummy topping that makes these muffins so delicious.)

I served these this morning to a house guest staying for the week (someone who had never experienced my low-carb baking before) and he "ooohhh-ed and aaawww-ed" while eating three in a row. When I told him they were low sugar and reduced carb, he couldn't believe it...and neither will you!
Best Reduced-Carb Blueberry Muffin EVER!
(Makes 12 muffins)

1. Bring 1 cup blueberries and 1 teaspoon sugar to a boil over medium heat. Cook, mashing berries with the back of a spoon and stirring frequently until berries have broken down and mixture is thickened and reduced to ¼ cup, about 6 minutes. Transfer to a small bowl and cool to room temperature, about 10-15 minutes.

3. Whisk flours, baking powder and salt together in a large bowl. In a medium bowl, whisk Splenda and eggs together until thick and well blended, about 45 seconds. Slowly whisk in melted butter spread and oil until combined. Whisk in buttermilk and vanilla. Using a rubber spatula, fold egg mixture and remaining 1 cup blueberries into flour mixture until just moistened. (Batter will be lumpy with a few spots of dry flour; do not over mix.)

4. Use an ice cream scoop or large spoon to divide batter equally among the muffin cups (batter should completely fill cups). Spoon a teaspoon of cooked berry mixture into the center of each mound of batter. Using a chopstick or skewer, gently swirl filling into batter using a figure-eight motion. Sprinkle lemon sugar topping evenly over muffins.

5. Bake until muffin tops are golden and just firm, 17-19 minutes, rotating muffin tin halfway through baking time. Cool in pan for 5 minutes, then transfer to a wire rack and cool for 5 minutes before serving.

How does this recipe compare to the original blueberry muffin recipe from America's Test Kitchen? This recipe is lower in calories, sodium and has only half the carbohydrate and saturated fat, plus it has more protein and fiber. For comparison, the nutritional information for a muffin made with the traditional recipe is 290 calories, 47.5 g carbohydrate, 9.5 g total fat, 3.1 g saturated fat, 292 mg sodium, 1.2 g fiber, 4.4 g protein.
Added 8/7/10: If you don't want to bother with a muffin tin, this can be baked in an 8" square baking pan instead. Bake for about 22 minutes or until a toothpick stuck in the center comes out clean. It makes a wonderful coffeecake or dessert!
Posted by The Diabetic Cook of Maine at 1:45 PM