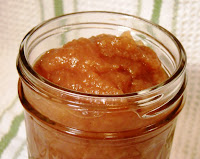 A few days ago, I made "Apple Pie" Sauce, which was incredibly delicious. My husband enjoyed it with light ice cream and for a week it was my go-to snack! Inspired by the same luscious flavors, today I turned my kitchen into an apple factory to cook up another spectacular creation. It was a bit more involved, but not difficult. First, I made a huge batch of fresh applesauce, then put it into my crock pot to simmer all afternoon and reduce into apple butter, which is a spiced apple spread for toast, waffles, pancakes, or anything in which you'd spread with butter or jam. (In spite of the name, it doesn't contain any dairy butter.) Also, it is a very flavorful ingredient in baked recipes to replace some of the oil or sugar, as you most likely will see used here in later posts. While it was cooking, my house smelled heavenly! It was better than any potpourri you could buy.

There are a lot of apple butter recipes out there, but very few that offer a sugar-free version and not any I could find that suggest adding vanilla with the spices. The vanilla seeds really gives this fruit butter it's distinctive "apple pie" flavor. A typical apple butter recipe calls for 1 or 2 cups of added sugar -- Yikes! In my opinion, if you use a combination of apples that include some sweeter varieties (or you start with "no sugar added" applesauce from the grocery store), you don't need to add any sugar. If your apples are tart, such as the local varieties I have used in my recipe, stevia works just fine. Homemade apple butter is a wonderful gift and this recipe makes enough to share with at least a few special people on your list!

1. Make applesauce by placing sliced apples and lemon juice into a large heavy pot and, without adding water, cook covered on medium-low heat until soft, stirring occasionally. Mash with a potato masher until a smooth consistency has been reached. If desired, you can use a handheld or standing blender, food processor or food mill for an extra fine, smooth sauce. (Note: If you don't want to make applesauce from scratch, purchase 12 cups of no sugar added applesauce from grocery store.)

2. Pour applesauce into a large crock pot or roasting pan. Add cider, stevia, spices, salt and seeds scraped from vanilla bean* and stir to combine. Simmer on medium-low heat for 5 to 8 hours, stirring occasionally, until thick and dark brown in color. (If cooking in oven, set for 350-degrees.) Time will depend on the amount of moisture in the applesauce. You want the mixture to simmer to release the liquid and reduce in volume by about half. You will know when it is ready because, instead of simmering, the bubbles will begin to have a "plopping" sound and the mixture will be very, very thick. You can partially cover pot to avoid splatters, but make sure the steam can escape. (I have seen it suggested to place two butter knives across rim of crock pot and place lid on top to allow a space for steam to escape.) Apple butter will thicken slightly when cooled.

3. If you plan to preserve the apple butter in jars, prepare jars by sterilizing. (Note: Always use new lids, but jars and bands can be reused.) Jars can be sterilized in your dishwasher, or wash with soap and warm water then place in a 200-degree oven for 15 minutes. Lids can be sterilized by soaking in hot (not boiling) water for 5 minutes. Pour hot apple butter into hot jars leaving ¼-inch space at top to allow for a proper seal, wipe rim of jar with dry paper towel, top with lid and tighten band just until finger tight. Do not tighten rim too much or it will interfere with seal. Boil in water for 10 minutes making sure water is at least 1-inch over top of jar (higher altitudes need longer boiling time, check with jar manufacturer for proper amount of time). Remove to a towel on your counter and do not touch for 12 hours or overnight. Test to make sure the top has sealed by pressing on middle of lid. If it is sealed properly, it will not pop up and down.

*Note about the vanilla: Using the seeds from a vanilla bean is preferred. If you don't have that available to add to the sauce before cooking, then add 2 teaspoons of pure vanilla extract during the final 10-15 minutes of cooking because if it boils too long, extract's flavor will be altered. If you are planning to can your apple butter and you're using extract, the vanilla must boil with the mixture for at least 10 minutes before pouring into sterilized jars.

How does this recipe compare with other apple butters made with cider? This recipe is lower in calories and carbohydrates. The average nutritional information for 1 tablespoon of traditional apple butter that includes cider as an ingredient is 45 calories, 11 g carbohydrate, 0 g fat, 0 g fiber, 0 g protein.

Original recipe by Kathy Sheehan, copyright 2009
Posted by The Diabetic Cook of Maine at 5:17 PM