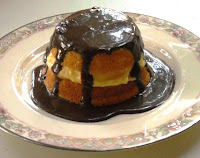 Boston Cream Pie is my all-time favorite dessert. Whenever I have a special occasion to celebrate, this is what I want. The morning after my only child was born, my husband brought a slice of Boston Cream Pie to me in the hospital to celebrate. On Christmas Eve, most often this is the crowning touch to our family meal. However, the spike in my BG that invariably would come after even a small slice took a lot of the enjoyment out of this rare treat. It has been a personal quest of mine for the past few years to come up with a lower carb version that doesn't sacrifice on texture and flavor. There have been some down & out failures, some acceptable but less than satisfactory attempts but, finally, I am happy to report that my mission has been accomplished with this recipe! The best part is that these mini cakes are already portioned and can be assembled as needed, so I won't be tempted to sneak an extra generous slice from a whole cake smiling up at me.

Many people wonder why it's called Boston Cream Pie, instead of cake. The history behind that seems to be that Americans in the mid-1800's most often baked their cakes in pie tins because the average homemaker didn't have specialized cake pans, which were not common until much later. This particular recipe came on the scene around 1856, when the Parker Hotel in Boston first served it under the name "Parker House Chocolate Cream Pie." It's popularity has spread and endured for over 150 years and there's no wondering why: Thick vanilla cream sandwiched between two layers of light, flavorful spongecake and dripping with chocolate. How can anyone say no to that? Especially now, when the total net carbs per serving is 16.2 grams and they're as easy to prepare as cupcakes!
Mini Boston Cream Pies
(Makes 12 individual servings)

3. In the mixing bowl with the egg yolks, add 2 tablespoons sugar and Splenda and beat with a handheld or standing mixer until mixture is very light in color and increased in volume, about 2 minutes. Add the oil and vanilla and beat for another minute. Add milk and beat on low to medium speed until well combined. Add dry ingredients all at once. Beat on low speed only until flour mixture is fully incorporated; set aside.

4. Remove beaters from mixer and wash thoroughly with dishwashing soap and warm water. Rinse thoroughly to remove any residue of soap. (It is important to get them very clean.) Rinse beaters under cold water and then dry completely before reinserting them into your mixer. Beat egg whites and cream of tartar until soft peaks form. Add remaining 2 tablespoons sugar and beat until stiff peaks form. Add 1/3 of the egg whites to batter and fold until batter has been lightened and egg whites are fully incorporated. Add remaining egg whites in two batches and gently fold with each addition just until no streaks remain.

5. Using a ¼ cup measure or ice cream scoop, fill each muffin cup ¾ full. Bake for 16-18 minutes or until toothpick comes out clean. Cupcakes will not brown much, so watch carefully and do not overbake. Allow cupcakes to cool in pan for 3-5 minutes and then remove to wire rack to cool completely.

6. While cupcakes cool, make filling. In a medium mixing bowl, beat the mascarpone cheese, milk and vanilla with a wire whisk until well combined. Add the pudding mix and beat for 2 minutes. Refrigerate for 20-30 minutes until quite thick and set.

7. When cupcakes are completely cooled, take a serrated knife and cut one cupcake in half and place top side down on serving plate. Spread 2 level tablespoons of the vanilla filling on cake, place the bottom half of the cupcake on top of filling. Repeat with remaining cupcakes.

8. Measure chocolate chips into a small bowl. Make chocolate glaze by heating cream until beginning to simmer. (Cream may be heated in a saucepan or in the microwave.) Pour hot cream onto chocolate chips and allow to sit for about 15-20 seconds. With a whisk, stir chocolate mixture until all the chips have melted and the mixture is smooth. Allow to cool for about 5-10 minutes. Glaze should be slightly thick, but still pourable. If too thick, add ½ teaspoon cream and stir. Drizzle or swirl 1 teaspoon glaze over each cupcake allowing it to drip down the sides. Serve immediately or refrigerate for 20-45 minutes. (NOTE: If not serving all the cupcakes, store uncut cakes in an airtight container or freeze. Fill and assemble within an hour of serving time, although assembled cakes can be refrigerated for up to 45 minutes.)

How does this recipe compare with a slice of traditional Boston Cream Pie? It is much lower in calories and fat, appreciably lower in carbohydrates and sugar grams, and higher in fiber. For comparison, the average nutritional information for one slice of Boston Cream Pie made from a traditional recipe is 490 calories, 55.5 g carbohydrate, 27 g total fat, 0.25 g fiber, 5 g protein.
Posted by The Diabetic Cook of Maine at 11:59 AM