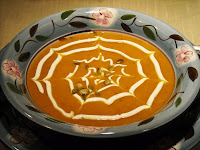 Last year, my husband and I went to Europe to celebrate our 25th wedding anniversary. While in the Normandy region in France and after a long, emotional day visiting the beaches and cemetery at Normandy, we spent the night in the beautiful village of Bayeaux. There, we were served a delicious soup that was just lovely. I asked how it was prepared and was told it was simply leeks, potatoes and carrots that had been pureed into a smooth and creamy soup. Being mainly potatoes, I knew the carb count was too high to eat very often, but since returning home I've tried on several occasions to duplicate that soup in a way more fitting with my dietary restrictions. Since the main emphasis cannot be white potatoes, I've substituted other more glycemic-friendly vegetables to recreate a similar taste and texture. The small addition of white cannellini beans really did the trick to boost the fiber and protein and added a "starchiness," similar to potatoes, that seemed to be missing from my other attempts.

This is a great recipe for the whole family. For kids who won't let a vegetable pass their lips, the smooth texture hides the fact that this soup is 100% vegetables. At this time of year, it's fun to create a spider web of creamy topping by dragging a toothpick through a spiral of sour cream that has been piped on top! For added fun, toast the squash seeds and drop them in the web as a garnish. A nice side dish might be cheese toast where a jack-o-lantern's face as been cut out of the cheese slice before melting under the broiler. Get into the season by choosing some different and interesting squashes that are abundant in the stores and farm stands or substitute other favorite root vegetables to make this soup exactly to your liking.

1. Cut or sliced all vegetables in a small dice, uniform in size. Heat olive oil in a large stock pot over medium heat and add leeks, carrots and celery. Add 1 teaspoon salt and cook stirring often until leeks are quite soft, about 10 minutes. Add potatoes, squash, parsnips, turnips, garlic, remaining 1 teaspoon salt and pepper. Cook for another 5-8 minutes, stirring often. Add broth, herbs, and bay leaves. Bring to a boil. Cover and reduce heat to low and simmer for 30-45 minutes until vegetables are cooked through and soft. (Time will depend on size of diced vegetables.)

2. Turn off heat and allow mixture to cool for 40 minutes. Remove bay leaves. Add cannellini beans and stir. Puree soup with a handheld immersion blender or blend in small batches in a regular blender until smooth and creamy. Taste and adjust seasonings.

3. Mix together the topping ingredients and spoon into a plastic sandwich bag. Snip corner of bag and pipe the sour cream mixture in a spiral on top of the soup to serve. If desired, drag a toothpick through the spiral design to create a spider web effect.

Original recipe by Kathy Sheehan, copyright 2009
Posted by The Diabetic Cook of Maine at 11:44 PM