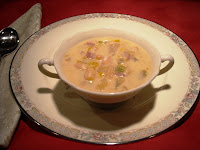 It has been a standing tradition for decades that on Christmas Eve we have a simple meal of leek and potato soup made from a family recipe, rolls and dessert. The soup recipe has always been the same and, as a matter-of-fact, it is known as "Christmas Eve Potato Soup" at my house because I serve it only once a year so it remains a special treat. The combination of the humble Irish potato and German flavors are meant to be a reflection of my family's Irish-German heritage. We love this soup and look forward to it every year. It is the taste of Christmas for all of us!

However, the emphasis on the potato in the traditional soup causes the carb count to go beyond my limit, making it impossible to enjoy without guilt and a BG response that is too high. My challenge was to reduce the carbs while keeping the same wonderful blend of flavors and textures that we associate with this special holiday meal. First, it is the combination of bacon, leeks and the velvety sour cream that are the distinctive flavors in the traditional recipe. Luckily, those ingredients are used in this makeover recipe in the same proportions. My substitution of turnips for the potatoes may sound strange, but actually they are a mild vegetable that readily takes on the flavor of whatever they're cooked in. Another potato substitution is cannellini beans (white kidney beans) that add that mealy, soft texture you expect from boiled potatoes. The first sign that this makeover recipe might be a winner came when my husband and daughter arrived home and the first words out of their mouths were, "It smells like Christmas in here!" Most importantly, we all agree it is the taste, that mirrors the original so closely, which allows this new soup to be deemed a delicious low-carb success!
Christmas Eve Vegetable and Bean Soup
(Makes six 1½ cup servings)

1. Place the bacon in a large pot and turn on heat to medium. Heat, stirring occasionally, until fat has been rendered and bacon is brown and beginning to crisp. Add onion and cook until soft and translucent. Add leeks, celery and turnips. Cook vegetables, stirring occasionally, for 10 minutes. Add chicken stock, cover and simmer for 30 minutes. Add rinsed beans to soup and continue simmering until heated through.

How does this compare to the traditional family recipe made with potatoes? This reduced carb version is over 100 calories less per serving and has fewer than ½ the carbs of the original. Also, this makeover recipe has less overall and saturated fat grams. For comparison, the nutritional information for a serving of the traditional recipe is 335.7 calories, 47.1 g carbohydrate, 11.8 g total fat, 5.2 g saturated fat, 3.7 g fiber, 11 g protein.
Posted by The Diabetic Cook of Maine at 7:18 PM