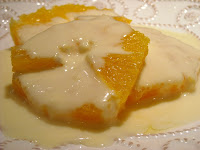 This is one of my favorite comfort foods that goes back to my childhood. It's adapted from my grandmother's recipe that she called "My Float," which was most likely inspired by the "Floating Islands" dessert that was so popular many decades ago. It is a rich, vanilla egg custard (more like a sauce or eggnog) that my grandmother would make as a treat for my mother when she was sick as a little girl in the 1940's and 50's. This tradition was passed down, as I recall my mother making this same easy-to-swallow dessert for me and I later made it for my own daughter when she was sick. I can't taste it now without feeling surrounded by the love of these special women in my life.

Last week I developed a spring cold and, when my throat was dry and sore, I decided to remake this special recipe and sip it warm. It brought immediate comfort both physically and emotionally. I used a mixture of 1% milk, almond milk and a bit of mascarpone cheese to replace the whole milk called for in the original recipe, which reduced the calories and some fat. When I replaced the sugar with Splenda, the carb count was slashed by 75%. The taste is every bit as delicious as I remember. It can be eaten alone one soothing spoonful at a time, or serve it over fresh fruit. Orange slices are especially nice if you like the taste of creamsicles! Anyway you serve it, I'm sure it will bring you comfort and joy, too.

1. Beat the eggs in a medium bowl and add 2 cups milk. Beat with a wire whisk until well blended. Pour through a strainer to remove egg solids that did not incorporate and return mixture to bowl. Add almond milk, dash salt, Splenda and mascarpone cheese. Whip with a wire whisk until well blended. (Tiny specks of the mascarpone cheese may not blend completely, which is fine. They will melt into the mixture when heated.)

2. Boil only enough water in the bottom pan of a double boiler so that the top of the double boiler doesn't touch the water, but will hover above it. (If you don't own a double boiler, use two different size pans and nest them one inside the other, but be sure the top pan won't be sitting in the boiling water.)

3. Pour egg mixture into the top pan of a double boiler and place over the boiling water. Reduce heat until water is simmering and stir the egg mixture often for the first 5 minutes. Continue stirring constantly until mixture thickens slightly and coats the back of a spoon. This may take 10-20 minutes depending on the temperature of the water. NOTE: Do not overcook or boil mixture because the egg will separate and scramble! The temperature only needs to reach 160°F for eggs to be safely cooked.

4. Remove top pan from heat and allow to cool for 5-10 minutes, stirring occasionally. Add vanilla and stir to combine. Refrigerate custard until serving time. If desired, the custard can be served warm, but it is usually served chilled either alone or over fruit. It is wonderful over fresh orange slices or any combination of fruit salad.

Recipe by Kathy Sheehan, copyright 2011. Inspired by my grandmother Gaga's recipe taken from her handwritten recipe notebook from the 1940's.

How does this compare to my grandmother's recipe? This recipe contains significantly fewer calories and carbohydrate compared to the traditional recipe that calls for whole milk and sugar. For comparison, the nutritional information for the same size serving of the traditional recipe is 168.8 calories, 25.3 g carbohydrate, 5.2 g total fat, 2.5 g saturated fat, 106 mg sodium, 0 g fiber, 5.9 g protein.
Posted by The Diabetic Cook of Maine at 8:41 PM